The Shifting Landscape of Supporters: Harnessing the Power of Storytelling Across Generations

Home UncategorizedThe Shifting Landscape of Supporters: Harnessing the Power of Storytelling Across Generations

The Shifting Landscape of Supporters: Harnessing the Power of Storytelling Across Generations

As the donating power of Baby Boomers shifts to the wallets of younger generations, the landscape of nonprofit supporters is naturally changing. It logically follows that nonprofit fundraising strategies need to evolve in response to this new landscape.

It is important to adopt practices that allow donors to utilize mobile devices to make donations, for example, but it is even more important to know why this is the case. Reactive, defensive strategies often miss the nuances that lead to flexible planning.

Foremost, it is important to understand why people donate. The answer to this “why” is not a new trend, nor is it based off of the impulses that drive us to spend money from our iPhones or give our belongings to charity.

No, persuading potential supporters to give to nonprofits revolves around one of our basic human instincts: we want to tell stories about ourselves that make us feel good.

The Search for Meaning

The quest for a personal narrative is nothing new. It is what prompts us to make home movies and capture our lives in photos. Now, we curate Pinterest boards and Facebook photo galleries. Thirty years ago, neighbors invited each other to their houses to share vacation slides and look through scrapbooks and photo albums. People are natural storytellers.

In 2012, musician Amanda Palmer energized her fanbase in a way fundraising organizers should take note of. Using the crowdfunding platform Kickstarter, she raised more than $1.2 million for a new album. She used the storytelling tools available through modern technology and her close connection to and understanding of her fans to make fundraising history. In reality, it was her supporters who did the hard work for her. They donated to her project, but they also shared her “ask” on Facebook and Twitter, wrote about it on their own blogs and websites, and were willing in some cases to give thousands of dollars or more for special collector’s items, house parties, and one-on-one time with Palmer herself.

At the time, Palmer’s Kickstarter raised the largest amount of money for an artistic endeavor on the site and was exponentially larger than her original goal of $100,000. Her success spawned a TED Talk and a book, both titled The Art of Asking.

For years, Palmer has been connecting to her fans through her email newsletter, her blog, and social media, constructing a story that she tells to them but also helping them to construct the stories that they tell to themselves and to one another. Her followers are a social network unto themselves. In her book, she writes, “we’re back around the fireside, albeit sometimes using our smartphones.”

Palmer’s success is an example of how important it is to harness this need to share stories in the name of fundraising, especially in a digital landscape with seemingly unlimited tools that allow everyone with computer access to share their personal stories. Instagram, Facebook, Twitter, Snapchat, smart phones, and the like are not around because of an innovative vacuum. People, more than ever before, are taking charge of their own stories, seeing the world as a potential audience poised to listen. As a nonprofit, your “ask” should be keyed into this human narrative impulse, with a focus both on the storytelling platforms your supporters are using and those you can use to spread your visibility.

Your “Ask” is a Story

Crowdfunding has become quite the trend in fundraising in recent years, but its elements have been seen for decades, even centuries. Successful crowdfunding campaigns revolve around good storytelling principles. It is good practice to raise funds for a specific, focused cause and to set campaign pledge levels around the story of either what the donor will receive (like a hand-written thank you from someone who was helped) or what those helped will receive (for example, $10 could buy lumber for a house being built for a displaced family).

In a 2010 study of philanthropic giving that was conducted by The Center on Philanthropy at Indiana University, the number one response for why high-net donors who make more than $200,000 a year give, whether it’s a large or small amount, is because they were moved by how their donations can make a difference. And, while a correlation between a donor and a nonprofit’s values and mission does play a part, it is telling that it is the way an “ask” tugs at a donor’s heartstrings that results in a completed donation.

Fundraising platforms are beginning to take notice and innovate in ways that make asking more intuitive and powerful in energizing a nonprofit donorbase. Crowdfunding is being utilized in a big way to tell the nonprofit’s story, show donors exactly where their funds are going, and allow supporters to take initiative and create their own campaigns.

Supporters want their involvement in nonprofits to be personal and meaningful. Studies have shown that stories change the way humans think and interact in the world. In an MRI study conducted at the University of Southern California by neuroscientist Mary Immordino-Yang, it was discovered that participants who heard a moving, true story experienced physical, visceral responses.

These responses are why, when we read stories about frightening situations, our own hearts begin to pound; these emotion driven-responses “[start] in the brain stem, which governs basic physical functions, such as digestion and heartbeat.”

These responses affect more than just the reader’s physical systems, though. “As they reacted to the stories, subjects also reported strong feelings of moral motivation. When one participant listened to a story about a Chinese boy giving a warm cake to his mother…he talked about how it had made him reflect on his relationship with his parents and what they’d given up for him.”

Providing multiple ways to get involved allows supporters to act immediately when a sense of moral motivation hits them. They want to make a difference, but in their own way and not necessarily through their wallet. A community leader might want to join a board, while someone just starting their career might offer accounting or bookkeeping help. A college student or local artist could help with a website or artistic project. Volunteering at a nonprofit organization can become part of a supporter’s life story, one they’ll want to share with others.

This is why maintaining media streams relevant to the demographics of your supporters is important. Supporters follow their favorite nonprofits on Facebook, Tweet about their donations, and share videos about their favorite causes. A “nonprofessional” is no longer limited to supplying menial labor in order to help their favorite organization.

More importantly, someone who is not motivated to donate might be motivated to pass on a nonprofit’s message, drawing more eyes to the cause and the ways to donate and support that cause. This was so very clear in the case of the Ice Bucket Challenge, which exploded into viral history in 2014.

According to an article in Forbes, the Ice Bucket Challenge, a summer fundraising campaign that initially involved golfers interested in raising money for charity, not even a specific cause, raised $100 million for ALS between July and August of 2014 (and $115 million in total). That’s a 3,500 percent increase from the previous year’s summer donations to ALS during the same time period. The campaign raised so much because it hit a “sweet spot:” the campaign was fun to participate in, it was easy to share with friends, and the public had easy access to the videos people were making in support. In fact, the campaign became so successful, people began complaining about the motivations behind supporter participation.

According to Forbes contributor Dan Diamond, the large complaint during the challenge was “that participants [were] driven by narcissism, or that the videos don’t actually accomplish much,” which is a petty concern when faced with a $115 million windfall for ALS research.

Give supporters a way to share and they will, if they believe in your mission and are moved by your story. Even better yet, give them a vehicle to create their own campaigns. Their ownership over your success creates an even stronger bond in their minds.

Build an “Ecosystem” for Fundraising

Many nonprofits follow fundraising trends, but it’s important to know why these trends exist. Integrating smart phone donations into a fundraising strategy makes sense for Millennials, who use their phones for everything from making calls to placing online orders. They will easily get swept up in an event and make a donation with a few swipes. It makes less sense for nonprofits whose donor base is aging up and out of the demographic that places so much trust in mobile devices.

The secret to good fundraising strategy for the average nonprofit is always going to be to know your supporter base and to create an ecosystem that supports diverse methods for people to donate and get involved. Know that the donors you have who still send their donor cards every month through the mail with a physical check aren’t going to be there forever, but don’t move everything over to digital donations until you have the infrastructure to support it.

The secret to great fundraising strategy is to know how to make the current technological tools work for you. Behind the trends, behind the demographic data and surveys and research nonprofits have access to, it’s important to know what makes potential donors tick. It’s important to realize that donors have unprecedented access an endless stream of information and to storytelling tools. Utilizing this human need for story in the nonprofit’s favor has never been easier, or more important.

We’ve been working alongside food banks since 2012 and have[...]

This is a test button. 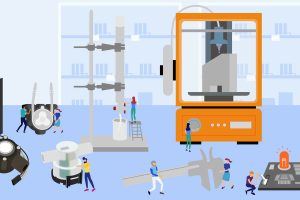 CommitChange creates fundraising tools for organizations like OIF to raise funds needed to continue their work. As of this writing, The Open Insulin Foundation has raised nearly $90,000 on CommitChange for its effort to democratize the production and distribution of insulin.